I bought a pen and paper RPG this week for the first time since, well, frankly I can’t remember. But definitely since college, so at least 7 years. I’ve been following developments in RPGs since then, playing here and there, but I haven’t felt the need to buy one until I saw that they re-released Gamma World. 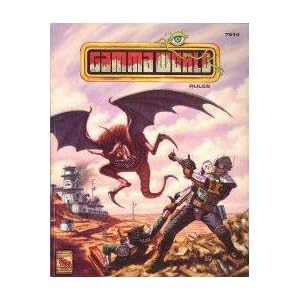 The first version Gamma World I had was a strange game. I bought it originally back in 1992, 93, perhaps – turns out that was actually the fourth edition of it. I remember reading it in the family van, being confused initially by its odd setting and rules and saying, “I don’t like this game.” But I still liked the cover art. Laser guns, monster, and a dog man. So I gave it a shot with my brother and my friends anyway. And it was great.

The most fun part of Gamma World was rolling for mutations on the Character Creation table to determine what sort of weirdness you were dealing with. Occasionally you’d get lucky and get to pick one, so you’d pick one of the cool ones: wings, dual brain, multiple limbs. But maybe you’d end up with a weird one like oversized limbs, or a defect like allergies. Then you’d storm out into a wasteland armed with a rifle and a stop sign and slug it out til you died, and it was awesome.

I have to praise this new edition of Gamma World for nailing all the things I liked about past versions of the system and removing the rest. It’s definitely rules-lite compared to the somewhat ponderous 3E & 4E, but elegantly so. Character creation is streamlined as to maximize randomness, but leaves you with something fun and cool every time: Radioactive Android. Hypercognitive Yeti. Telekinetic Rat Swarm.

They also added a card mechanic that gives everyone random mutations for every encounter. YESSSS! The essence of Gamma World in a fun, constantly changing little gimmick. What a treat. The same mechanic is used for advanced tech, which was rare and valuable in the older versions. Great ideas, well executed. Nothing but whiz-bang action and weirdness.

Granted, I haven’t played it yet. But I’m definitely going to. This version seems like it’s poised to recapture the fun of the first version I had, when I was praying for multiple limbs.